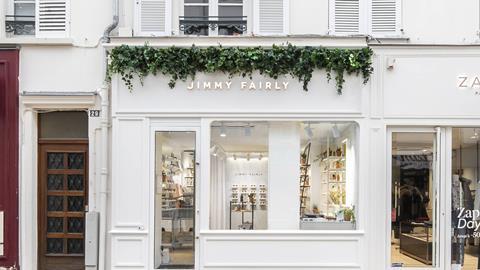 The vertically integrated French eyewear brand Jimmy Fairly is changing hands after its founders, Antonin Chartier and Sacha Bostoni, and the investment fund Experienced Capital, their main financial partner since 2017, agreed to sell a majority stake of the company to the HLD investment fund. Experienced Capital will exit the eyewear company but Chartier and Bostoni will retain an important stake and keep their operationnal roles, implementing the new owners’ plans which call for an increased international presence.

Launched in 2011 as an online retailer, Jimmy Fairly opened its first shop in Paris in 2012 and has now extended its retail footprint to a total of 58 directly operated stores, including 54 in France and 4 in London. The company has developed its business on a DTC omnichannel model similar to the one of Warby Parker in the U.S., positioning itself as an affordable design eyewear brand, with eyeglasses retailing from €99 including prescription lenses and sunglasses from €129.

Jimmy Fairly collections are all designed in-house and the frames are produced in Asia or in France and the company operates an assembly workshop near Paris from which it guarantees a 24-hour delivery anywhere in Europe.

The brand, whose core target customers are between 20 and 30 years old, is also putting emphasis on its corporate social responsibility (CSR) initiatives, such as its “Buy One, Give One” program that resulted in the distribution of over 600,000 free glasses since its implementation. On the sustainability front, the company’s acetate frames are currently made from 60 percent bio acetate with the objective to push this ratio up to 80 percent next year, while its shops and other locations operate on 100 percent green electricity.

According to the French business newspaper Les Echos, Jimmy Fairly’s annual revenues reached €38 million last year, after a 45 percent average annual growth in the last four years and the company’s growh remained solid in spite of the Covid19 outbreak. Pure online purchases are said to account for 7 percent of the company’s sales, but more than two thirds of its customers browse the collection on its website before visiting the stores.

HLD is a European investment fund with offices in Paris, Milan and Zurich, and presents itself as a longtime partner for the companies in which it invests, with a financing capacity of up to €500 million by project. The amount invested in Jimmy Fairly has not been disclosed, but the analysts from Mergermarket have estimated that the transaction was based on an estimated valuation of €150 million for the eyewear company.

HLD is targeting to triple Jimmy Fairly’s annual sales in the next five years through the opening of numerous new DOS locations in France and abroad, with an initial focus on Europe. Over 50 new shop openings are reportedly planned in France, as well as thirty more in the U.K. before launching in Italy and Spain.