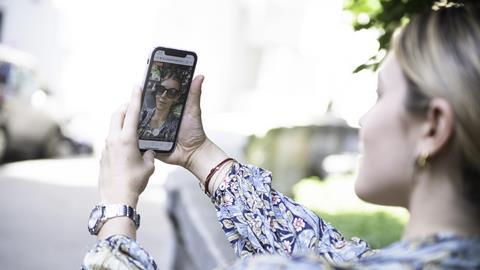 Fittingbox, the French-based supplier of eyewear virtual try-ons (VTO) and other digital services, has seen the use of its try-on service triple in 2020 to reach 54 million annual VTOs, a spectacular growth driven by new clients’ acquisitions and by the digitization of our sector and a general shift in customers’ purchasing habits.

The company seems to be on track to pass the 100 million VTOs mark this year as reflected in the chart below, with a total of 33.7 million VTOs already processed between January and April 2021, a 265 percent jump from the same period in 2020. While the growth was mostly fueled by the impact of newly acquired clients using Fittingbox’ technology, such as Maui Jim or the Japanese-based retailer JINS for example, the company also told us that it registered a 30 percent year-on-year increase in the number of VTOs on a comparable basis.

In terms of VTOs volume, optical retailers accounted for 77 percent of the technology’s use in 2020. This clients’ category includes retail chains like Fielmann, which is also a minority shareholder in Fittingbox since 2018, Alain Afflelou, Hans Anders and General Optica among others. The share of eyewear brands in the total number of VTOs is growing but represented only 13 percent of try-ons last year with clients like De Rigo, Etnia Barcelona, Vinyl Factory, Maui Jim or more recently LVMH. Fittingbox is also behind the VTO solution used by Transitions. The remaining 10 percent of the company’s try-on volumes are done through pure internet players or e-commerce-centered companies like Jimmy Fairly, Eyerim or Edel-Optics.

According to preliminary data compiled for January and February by the company, the largest optical retailers’ segment overperformed the others in terms of year-on-year growth rates, probably reflecting their digitization efforts towards an increasingly omnichannel customer journey.

The top seven eyewear manufacturers accounted for 39 percent of last year’s VTOs processed with Fittingbox’ technology. As shown in the table below, the top 5 eyewear brands for the first four months of 2020 and 2021 all come from the major Italian eyewear groups’ portfolio, with Ray-Ban holding a very comfortable leading position. With more than 2.6 million VTOs in the period, the Luxottica’s brand gathered close to eight percent of the company’s total try-ons and more than half the top 5 brands’ aggregated volumes since the start of the year.

Unsurprisingly, the three most tried frames with Fittingbox’ system in the last four months are three Ray-Ban frames – Aviator Large Metal RX 6489, RX 6375 and Round Metal RX 3447V –, all from the brand’s ophthalmic range. Eyeglasses accounted for 75 percent of Fittingbox’ total VTOs in the first four months of 2021, a two percentage points’ increase as compared to the same period last year possibly because of the increasing weight of optical retailers in the overall VTOs volumes.

The share of sunglasses in frames tried online tends to increase to between 35-45% from May to August but this increase is offset by fewer VTOs in the winter for this product category. On the basis of the full 2020 year, sunglasses’ VTOs were measured as just over a quarter of the total.

VTOs volume according to the frames’ material are evenly split between metal, plastic and multi-material which account for about one third of the total each. However, the proportion of multi-material frames tested online by customers slightly increased in the start of this year as compared to 2020, and as illustrated in the chart below.

Fittingbox, which is celebrating its 15th anniversary this year with a new corporate identity, logo and website, has been developing new products and services to complement its main and initial VTO offering.

The company has built over the years a database of over 100,000 3D-scanned eyewear references across 420 brands, to which it is adding an average of 4,000 newly digitized glasses every month, scanned from the real physical frames. Fittingbox is making its database accessible to retailers and website developers. Other services made available to e-commerce players in the eyewear industry include the Optical Toolbox, with a pupillary distance measurement tool and a lens simulator for the virtual try-on of different lenses’ shades and coatings, as well as frame recommendations based on facial analysis.

After an initial test period with some of its clients, Fittingbox is also about to launch a new service aimed at facilitating the creation of marketing material for eyewear brands and retailers. Called Model Studio, the new tool will allow users to add a virtual pair of glasses on the face of any existing model’s photo while providing a real-life feeling, according to the company.

Fittingbox is also investing in business intelligence to develop a new service providing eyewear industry players with detailed data and e-commerce/VTO trends’ analysis. For this purpose, the company has recently recruited Sandrine Geffroy, a former product manager at GFK, and a small team of data analysts.