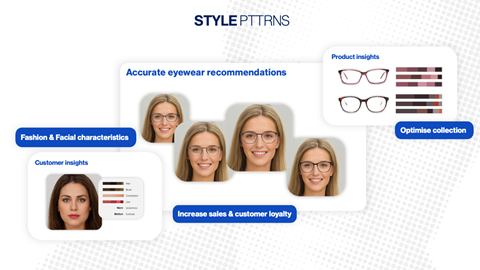 Hans Anders will start using STYLE PTTRNS, a style recommendation tool for prescription eyewear created by Eindhoven-based startup PTTRNS.ai, on its Dutch e-commerce website starting July 15. The company’s program is presented as a service to assist online and in-store customers in the time-consuming and often challenging selection of their eyeglasses.

The recommendation process starts with a scan of the consumer face through their smartphone or computer’s camera, a step during which 17 facial features and 24 eyewear data points are collected, including jawline, skin tone and the shape of the eyebrows among others. Based on the extracted information and on PTTRNS.ai systems’ style analysis of over 3,500 frames, an initial selection of eyeglasses’ styles available at Hans Anders is proposed. In a second stage, consumers can personalize the recommendations further by entering personal style preferences such as outspokenness, friendliness or trendiness before checking how they look with the selected eyeglasses on.

Contrary to the virtual try-on (VTO) solutions available on the market that work on 3D scans, STYLE PTTRNS works on a 2D picture of the wearer’s face and the styles’ selections are based on photos of the eyeglasses’ fronts. However, the solution can be integrated on retailers’ website with VTO tools as is the case on Hans Anders’ website which is using FittingBox’ system. In that case, the virtual try-on come in the second stage of the online consumer journey after the styles’ recommendations and the selection of one design.

Bram Bruijns, director of digital and innovation at Hans Anders, noted that, even if the company’s omnichannel customer journey generally works well, there are still a portion of people who visit the website but don’t take any visible action online. According to him, customers need to be offered advice online similarly to what is happening in actual optical stores and the launch of the PTTRNS.ai tool aims at solving this issue.

According to Jelle Stienstra, digital strategy director of PTTRNS.ai, its program’s suggestions result in a 95 percent user satisfaction rate based on the company’s consumer survey and is expected to increase sales’ conversions by 5 to 15 percent while reducing the number of returns by 10 to 30 percent. STYLE PTTRNS is offered on a monthly subscription basis.

Founded in 2018, PTTRNS regroups a team of 30 specialists in the areas of artificial intelligence, e-commerce and fashion and style design. The company, which has raised about €2.5 million in venture capital since its creation, boasts earlier collaborations on specific projects with brands such as Philips, HP, Audi or Nike.

The eyewear team consists of 10 people, including three stylists, three product developers and three machine learning and data specialists. PTTRNS.ai will present its product at the next Silmo show in Paris.