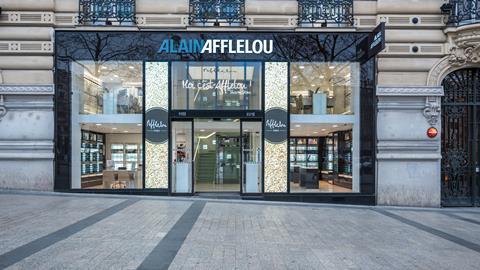 The Afflelou group reported revenues of €189.3 million for its third quarter and of € 618.1 million for the first nine months of its current financial year, representing year-on-year increases of 74.4 percent and 24.5 percent, respectively.

The group highlighted that its total sales for the first nine months were 2.8 percent higher than in 2019, the last pre-pandemic fiscal year, and this is in spite of continuing Covid-related restrictions in France. Until May 19, the group’s stores located in large malls, which normally account for 20 percent of Afflelou’s revenues in France, were not authorized to open.

As a result, Q3 sales in the country were 6.8 percent lower than for the same period in 2019. Also, as compared to 2020, the revenue increase was lower in France, 70.2 percent, than in Spain, 90.2 percent. The company said it gained market share in Spain over the last twelve months, with revenues decreasing by 1.8 percent while the market declined by 7 percent. Quarterly revenues in the other regions’ segment increased by 91.9 percent as compared to the previous quarter and were 5.1 percent higher than in 2019.

For the nine months, France accounted for 78 percent of the group’s network sales and Spain for 15 percent.

Afflelou said that its acoustic business revenues grew by 50 percent for the first nine months as compared to the same period in 2019, benefitting in particular from the French healthcare reform introduced this year that enables the purchase of hearing aids at no cost for the consumer. The segment represents about 7 percent of total group revenues.

For the quarter, the group reported an adjusted EBITDA of €19.8 million, of which €15.7 million from the French operations where the impact of the store closures was partly offset by the positive contribution from the hearing aids’ business. Quarterly adjusted EBITDA improved sharply in Spain - €3.4 million versus €0.7 million in 2020 -, and in the other regions - €04 million versus a €0.3 million loss in 2020.

For the first nine months of the current fiscal year, adjusted EBITDA was reported at €72.2 million, representing an adjusted EBITDA margin of 11.7 percent or 1.3 percentage points higher than in 2019.

Afflelou reduced its net debt from €437 million as of July 30, 2020, to €393.7 million as of April 30 this year. As previously reported, the group refinanced its debt in May by emitting a new series of high-yield bonds for €485 million.

In terms of store count, Afflelou had 1,439 retail locations at the end of the last quarter, a year-on-year net increase of 19 units.