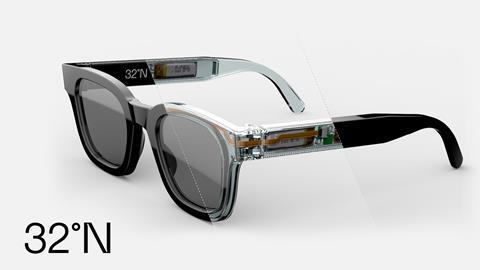 It took less than twelve hours for the Israeli startup Deep Optics to complete its $25,000 objective in its Kickstarter campaign for the launch of its new 32°N product, a pair of sunglasses with adaptative lenses that can easily be switched to a reading glasses’ function.

Launched on the crowdfunding platform last Wednesday, the campaign, which proposed the sunglasses at pricings between $229 and $349 instead of the regular $449 retail price, collected close to $100,000 in less than a week.

Aimed at presbyopes that are tired of switching their sunglasses to reading glasses when they are outdoor, the brand’s 32°N sunglasses’ lenses incorporate a liquid crystal layer that can dynamically change its optical power according to the users’ needs, the company says.

When the lens is off, wearers can see normally in the far distance as through a standard pair of plano lenses, and the switch to the close distance reading function can be activated by a swipe on the temple. This gesture triggers the repositioning of millions of tiny liquid crystal pixels into the active area of the lens in accordance with the wearers’ magnification needs, which have been calculated and registered beforehand through a dedicated smartphone application. The application also handles pupilar distance measurements.

The 32°N sunglasses are charged like smartphones and are said to run with a full day autonomy. Their reading prescription range can go up to +2.0 diopters, with the possibility to address higher magnifications, however with a reduced performance. The current product is not designed for people needing other eyesight corrections such as myopia, hyperopia or astigmatism but the companly plans to include these in late 2022.

Buyers on the Kickstarter website were offered the product in three different colors, for a delivery in April 2022.

Founded in 2011, Deep Optics said that the 32°N sunglasses are its first commercial launch based on its patented technology developed after ten years of research and development. In 2016, the company had raised $4 million in series A funding with several investors, including EssilorLuxottica. Samsung is also among the startup’s strategic investors.

In 2018, Mitsui Chemicals, the Japanese-based supplier of lens’ materials, had launched TouchFocus, a pair of eyeglasses also incorporating a liquid crystal area in the lenses allowing to switch from far to near vision by a touch on the temple. The product is currently only available in Japan, retailing for around €2,000. 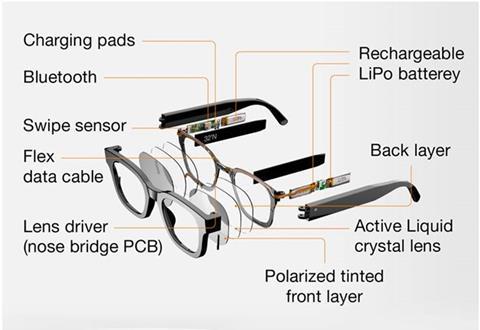